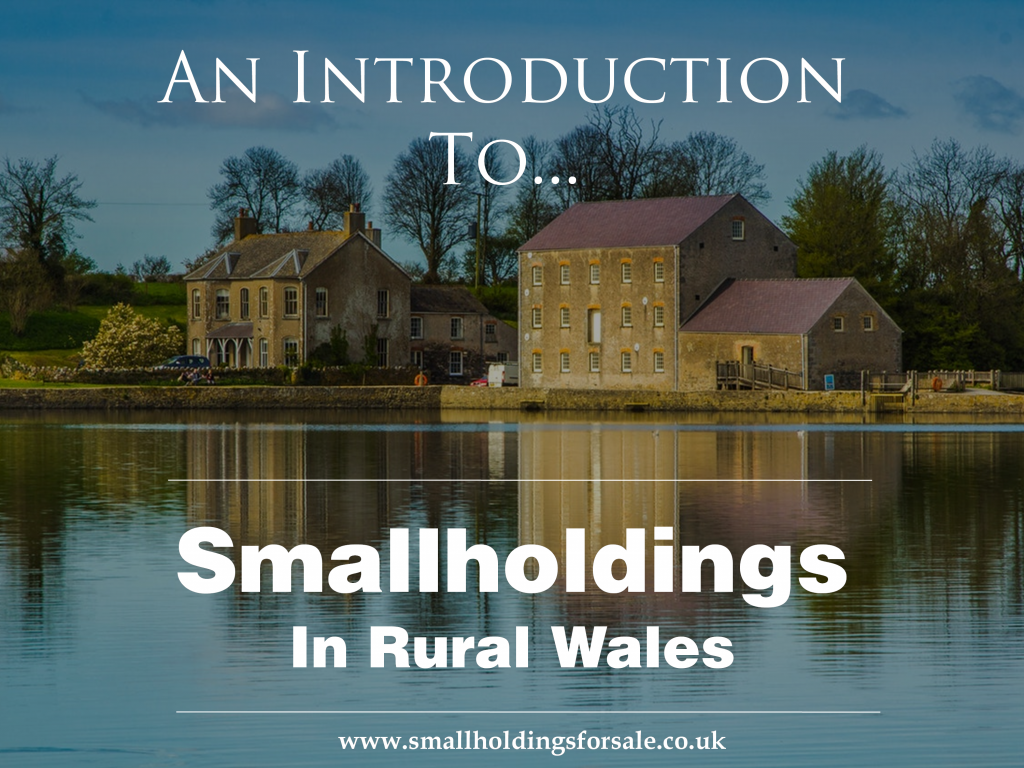 Smallholdings For Sale In Wales

The scenic rural landscape of Wales is an ideal location for owning and running a smallholding. Here are a few reasons why…

A few pointers to buying a smallholding in Wales

Bordered by England, the Irish sea and the Bristol channel, Wales presents a varied rural landscape. There are a multitude of advantages to be gained by owning a Welsh smallholding which are supported by the country’s unique geographic characteristics.

With over 8.000 sq miles in total land area, Wales, is predominantly mountainous. The weather is typically mild and wet (on average receiving high rainfall in comparison to the rest of the UK) on a relative scale.

The combination of these various ecological features renders the Welsh countryside less than ideal for producing arable crops (only approximately 6% of the nation’s overall land mass is fit for growing commercial crops), yet historically it is more suited for rearing livestock.

With over 35,000 hectares of organic farmland – Wales is fast becoming a recognised producer of premium ticket organic crop. Current records show over 1,000 organic farms operating out of Wales based smallholding buildings.

Herding of cows and sheep is the most intensive livestock pursuit in rural Wales. Hosting over 1,800 dairy producers, Welsh farmland is a popular source of milk, cheese and yoghurt – yet only a slither of this overall production by comparison is actually consumed on home ground. The vast majority is exported as cash produce.

Growing salad crops such as potatoes, kale as well as other brassicas is increasingly becoming the focus of more smallholdings owners, along with soft fruit and apples from private orchards. These are grown mostly for subsistence, with many now looking to ‘farmers markets’ and the internet for private sales.

Benefits Of Investing In Cheap Derelict Smallholdings For Sale in Wales

As a would-be investor if you are seeking a more adventurous prospect with great growth potential, then perhaps a derelict smallholding in Wales is more appropriate.

Much of the rural landscape is littered with such properties which have often become too costly to upkeep for the  owners who seek to off-load them to willing newcomers inclined to take an uphill climb.

Such projects clearly require large capital investments once acquisition has been accomplished as the transfer is of an incomplete asset. However, if the smallholding is sold for cheap enough, the financial viability of the project can be good.

If you are able to personally pull of large scale renovations, or can effectively assemble a multi-disciplinary team of contractors to perform the building works then you might consider such a proposition as feasible.

Patience should be exercised in order to realise the true profitability of such a venture. This kind of purchase isn’t an immediate win and therefore comes with associated risks not present when buying a fully functioning smallholding investment.

Be sure to thoroughly investigate the planning permission associated with the derelict property before investing. This way you define the entire scope of what is entirely possible before drawing up renovation plans. Knowing the full scale of what is possible before you begin gives you the best opportunity to plan for optimal results.

The advantages of smallholding renovation

A closer look at the rural Welsh counties

Anglesey is the largest of the Welsh islands.

It is a relatively low lying island, by aspect, but with a region of low hills. It has been prone to flooding during winter periods when torrential downpour has led the breaking of the banks of local rivers like Afon Cefni.

The isle is separated from the mainland by the Menai Strait, a 16km wide tidal waterway, it’s banks currently spanned by two bridges to North Wales (Menai Bridge and Britannia Bridge)

The island enjoys unique coastline of which there is about 125 miles encompassing.

Some features of Anglesey:

Llangefni is the administrative centre of the island, a capital of sorts with museum, town markets and nature reserves.

The remainder of the Welsh island county is fairly evenly populated with several small settlements scattered throughout.

Official figures published by the, Welsh Government-funded Wales Rural Observatory estimate that over 47,000 hectares of the Isle of Anglesey is sparsely populated. This geographic coverage would equate to about 23,000 residents.

The Isle of Anglesey benefits from sound connectivity. Transport connection to mainland Wales is by bridge (bus and car), train, plane or ferry.

This makes it a popular destination within Wales for tourism, including geology schools trips and educational recreational excursions.

Anglesey has been quoted that the mobile connectivity is patchy at best and largely ineffective in the more rural parts of the island.

Making your smallholding in Wales provide an income may well be a deciding factor in assessing the feasibility of this as an investment.

With many smallholdings coming off-the-shelf, as it were, with built-in income generation, you may not expect to do much more than sit in your new saddle in order to receive earning benefits. However, with smallholdings investments which lack ready-made income stream, this calls you to get innovative.

To help you along your way, we have compiled some shortlisted suggestions for how you might engineer income generating enterprises within your smallholding:

This concludes a brief introduction into smallholdings in Wales – giving you a taster of the backdrop and possibilities for you prospective rural property investment.

We hope you have gleaned enough from this feature to take some decided steps toward acquiring a smallholding of your own.

Want to find
the right
smallholding?

We are eager to help you access smallholding opportunities.